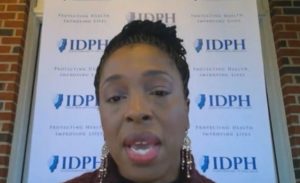 Dr. Ngoki Ezike, director of the Illinois Department of Public Health, says the state may receive significantly fewer doses of COVID-19 vaccines than it expected in the initial shipments, which could come before the end of the year. (Blueroomstream.com)

SPRINGFIELD – The first shipment of COVID-19 vaccines to the state of Illinois may be less than one-quarter of what officials had originally been told to expect.

Illinois Department of Public Health Director Dr. Ngozi Ezike said Tuesday, Nov. 24 that the latest word from federal officials is that the first shipment may contain only about 80,000 doses, or one-fifth of the 400,000 doses that state officials were expecting as recently as last week.

“We know that even if everything goes through smoothly in the next couple of weeks and the vaccine is shipped, there won’t be many doses,” Ezike said. “I know I had originally quoted 400,000 doses because that’s what we’ve been told. That number has already been downgraded to something like 80,000. Again, all of these numbers are constantly in flux and so we are staying very nimble in order to adjust. As the feds give us more information, we adjust and tweak our plans.”

Ezike spoke during Gov. J.B. Pritzker’s daily COVID-19 news briefing Tuesday, which was held entirely remotely due to the Tier 3 mitigation order that went into effect on Nov. 20. Before then, they were mainly held at the James R. Thompson Center in Chicago with a limited number of reporters present while other reporters observed by streaming video and asked questions online.

Interest in how the state plans to distribute a vaccine has heightened in recent days as a number of pharmaceutical companies have announced plans to apply for emergency use authorization from the U.S. Food and Drug Administration.

Last week, Pfizer and BioNTech announced they had submitted an application for two vaccines the companies are developing jointly, and the FDA said it would put those applications on a fast track for approval, which means a limited number of doses could be publicly available by the end of December. Moderna Inc. has also said a vaccine it is developing a vaccine that has shown promising results in clinical trials.

Ezike said the first people in line to receive the vaccines will be frontline hospital workers who treat COVID-19 patients and other first responders.

Meanwhile, both Ezike and Pritzker continued to urge Illinoisans to avoid gatherings over the upcoming holidays and possibly for the next several months in order to limit the spread of the disease.

“The vaccines that seem to be on the horizon can’t help you if you get sick now,” Pritzker said. “It appears it may just be a matter of months, not years, before it’s safe for all of us to gather with extended family and friends again. Let’s keep each other safe until then. It’s not too late to change your plans if you haven’t already.”

Pritzker also urged downstate cities and counties to take advantage of financial help that the state has made available through the Local CURE program. That’s a $250 million program the state launched this year, with money it received from the federal CARES Act, to help local units of government defray some of the costs they have incurred due to the pandemic.

Pritzker said about $118 million of that money has already been paid out, but more than 350 local governments still have not submitted an application.

The funds are available to local governments outside of Cook County and the surrounding collar counties, which received CARES Act funding directly because they have populations over 500,000.

“We know just about every community in the state has had to deal with new costs this year related to the COVID-19 response,” Pritzker said. “This program ensures that the funds to support those efforts don’t have to cut into local school budgets or roadwork or environmental cleanups or constant local taxes to increase to cover those costs.”

Brad Cole, executive director of the Illinois Municipal League, however, said many communities haven’t applied because they have “limited to no staff that can navigate the multiple steps put in place by (the Illinois Department of Commerce and Economic Opportunity) to receive their allocation.”

He also said the state will not allow local governments to use the funds to aid local businesses that have suffered due to the pandemic.

“Some of the communities that are not applying for their allocation did not have specific costs that could be reimbursed, but they do have businesses that could have received the local economic support,” Cole said. “DCEO’s rules to restrict the usage of the funds left many communities unable to qualify for the money.”