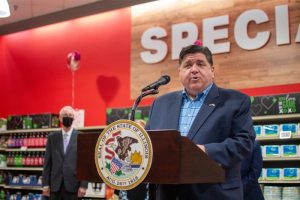 Gov. J.B. Pritzker speaks at Schnucks grocery store in Springfield Tuesday, Feb. 8 at a news conference touting his plan to suspend the 1 percent tax on groceries for the upcoming fiscal year. He told reporters to “stay tuned” for an upcoming announcement on the state’s mask mandate. (Capitol News Illinois photo by Jerry Nowicki)

SPRINGFIELD – Illinoisans should stay tuned for an announcement on the state’s indoor mask mandate, Gov. J.B. Pritzker said at an unrelated news conference Tuesday, Feb. 8, although he declined to say specifically what changes might be coming.

“I think I’ve said over the last few press conferences that I really believe that we ought to be looking seriously at how to ratchet that back,” Pritzker said of his administration’s mask mandates. “I think we’re going to be making announcements very soon about that.”

When pressed for what metrics the state is watching, Pritzker pointed to hospitalizations, although he did not say what thresholds would need to be met for changes to be triggered to the mask mandate.

“I would remind people that it’s downstate in southern Illinois and central Illinois where we’ve had the highest numbers of people, percentage-wise, filling ICU beds and hospital beds,” he said during a news conference at a grocery store in Springfield. “And now that the numbers are coming down, I think everybody, the doctors in particular, feel much more comfortable about alleviating mitigations.”

As of Monday night, Feb. 7, hospitalizations had dropped drastically across the state from a recent January peak driven by the omicron variant of the coronavirus. The 2,634 hospital beds in use by COVID-19 patients statewide as of Feb. 7 were down from the more than 7,300 in use on a single day in January.

Intensive care bed use for COVID-19 had fallen from a Jan. 12 peak of 1,177 to 464 as of Monday night, although Illinois Department of Public Health Data showed 70 of 73 available beds in southern Illinois were occupied.

Approximately 63 percent of Illinois’ population was fully vaccinated as of Feb. 2 with nearly 70 percent having received at least one dose.

Pritzker has faced increasing pressures to issue new mask guidance in recent weeks as other Democratic-led states such as California and New Jersey have announced plans to roll back mask mandates. As well, a ruling from a Sangamon County judge has thrown his authority to issue school mask mandates into question.

House Republican Leader Jim Durkin, of Western Springs, aired concerns about what he called a “go it alone” approach from the governor to the pandemic response.

“Now we are entering year three of this top-down strategy, and we see the chaos that it has caused,” Durkin wrote in a letter to the governor. “Today I am dealing with irate parents scrambling for childcare to make it to work, students being separated in school buildings, and no answers from your administration. Your lack of a plan has forced people to give up hope that they can ever have a normal life in Illinois.”

The announcement is coming soon, Pritzker said, but the fact that schools often serve as a central community hub makes the decision on how to approach masking mandates more difficult.

“And so we’ve got to be very careful about how we remove those mask mandates, and also making sure the schools are doing what’s responsible,” he said. “That they have the tests available going forward. That they know when they should be thinking about, at the local level, when they should be putting masks back on when there are outbreaks and so on. So that’s all, I think, in the careful planning process and we’ll be making an announcement.”

Beginning in August 2021, Pritzker issued a series of executive orders related to the reopening of public schools. They included a requirement that schools enforce a mask mandate for all students, staff and visitors; that they require all school personnel either be vaccinated or submit to weekly testing; and that they exclude from school premises for specified periods of time any student or staff member who tests positive for COVID-19 or who has been in close contact with someone who has.

On Friday, Feb. 4, Sangamon County Judge Raylene Grischow issued a temporary restraining order invalidating the mask and vaccine mandates for public schools. The ruling applied to approximately 170 school districts that were sued by parents and students.

Grischow ruled the mitigations amounted to a kind of “quarantine” and that the Pritzker administration overstepped its bounds by issuing those mandates through emergency rules.

On Monday, Feb. 7, Pritzker slammed Grischow’s decision for cultivating “chaos” for parents and families in the state, and he noted that Attorney General Kwame Raoul has appealed to have the ruling overturned.

Pritzker urged school districts not included on the list of those being sued to continue the course with the current mitigations as the state awaits the decision from the 4th District Court of Appeals.

“We’ve gotten here because people have been responsible in Illinois,” Pritzker said of declining hospitalization rates. “And so it’s a tremendous desire of mine to do what we did last summer, which is, you know, take masks off and see if we can get through this now that we have treatments, widespread vaccinations, testing available, and we all know to wear a mask when things get more difficult.”