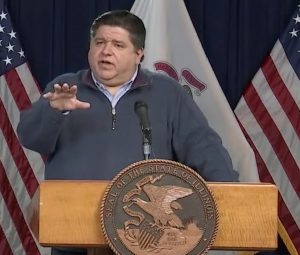 Gov. J.B. Pritzker on Friday, Dec. 4 said getting COVID-19 vaccines distributed to Illinoisans “will not be a quick process.” During his daily virus briefing in Chicago, Pritzker continued to urge state residents to practice safety protocols in the meantime. (illinois.gov)

Gov. J.B. Pritzker said the state still expects to get 109,000 doses to be initially distributed in the 50 counties with the highest per capita death rates, but it will be several months until there is an adequate number of vaccine doses available for the general population.

That means it’s just as important as ever to maintain social distance, wear face coverings, avoid large gatherings and get a flu shot, according to Pritzker and Illinois Department of Public Health Director Dr. Ngozi Ezike.

The first vaccine that could be approved by the U.S. Food and Drug Administration by Dec. 10 is manufactured by the drug company Pfizer. It requires an initial dose, then another three to four weeks later. Pritzker said the first shipment could arrive in two weeks. Another vaccine from the drug company Moderna could get approval one week following the Pfizer vaccine.

The initial recipients will be health care workers and long-term care residents. Pritzker said 655,000 people in Illinois qualify as frontline health care workers —162,000 in Chicago and 493,000 outside of Chicago. Approximately 110,000 adults statewide live in congregate care settings, he said.

After that group will be “other essential workers and persons at higher risks of severe COVID-19 illness, including persons 65 years of age and older,” according to the state’s vaccine plan. Then it will be “critical populations” as defined by the U.S. Centers for Disease Control and Prevention and its Advisory Committee on Immunization Practices, or ACIP. Then the general population can receive the vaccine. 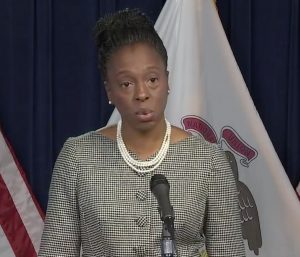 Illinois Department of Public Health Director Dr. Ngozi Ezike said during a news conference Friday, Dec. 4 in Chicago that even though COVID-19 vaccines appear to be coming soon it’s just as important as ever to maintain social distance, wear face coverings, avoid large gatherings and get a flu shot. (illinois.gov)

“In other words, this will not be a quick process. With the two-dose timeline, no single person will be fully vaccinated even by Christmas, and it will likely be months before people with low risk factors for COVID-19 see their first dose,” Pritzker said. “But the very fact that we have this timeline is the result of incredible private sector innovation and long standing public investment in scientific research.”

doses directly to Chicago and 86,000 to be distributed to the rest of the state.

It also must be kept at 70 degrees below zero Celsius, so the state has purchased 20 ultra-cold freezers, according to Ezike. She said IDPH will receive the initial shipment directly from the CDC and will store it at the strategic national stockpile site.

IDPH has identified 10 hospitals to serve as regional distribution sites to local health departments in the first 50 counties to receive the vaccine. Those hospitals will work with local hospitals to identify and vaccinate the first recipients.

Ezike also noted there is a federal partnership between Walgreens and CVS pharmacies to vaccinate long-term care residents, and all but five of the state’s long-term care facilities have signed up to be part of the program thus far. The state will work to register the final five, she said. 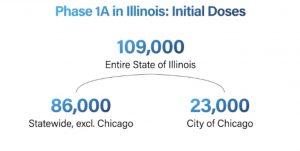 “(The system) allows both public and private health care providers to share immunization records of Illinois residents with other physicians and public health officials statewide,” she said.

Pritzker said ACIP is considering how to best distribute the vaccine in at-risk communities, and he noted, “we also know that for many reasons, Black and brown Americans have disproportionately suffered deaths from COVID-19 in their communities.”

“ACIP is currently considering specific allocations of the vaccine before expanding to the remainder of the population, and Illinois will account for their expert recommendation in the next tiers of distribution with a focused eye on equity,” he said.

The news came as hospitalizations for COVID-19 continued to trend downward, decreasing for the fifth straight day as 5,453 people with COVID-19 were hospitalized. That put about 16.7 percent of all hospital beds in use by COVID-19 patients and left 24.4 percent available statewide.

The state reported another 148 COVID-19-related deaths on Dec. 4, bringing the death toll since the pandemic began to 12,974 among 770,088 confirmed or probable cases. More than 10.9 million test results have been reported.

Initial shipments of the COVID-19 vaccine will be distributed to 10 Regional Hospital Coordinating Centers which will then coordinate distribution to the 50 counties with the highest per capita death rates for the virus.

The medical centers include:

Another 192 lives lost to COVID-19, officials call for blood donations