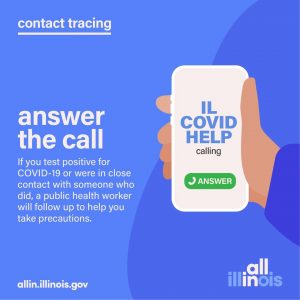 IDPH Director Dr. Ngozi Ezike said Friday, Nov 6 Illinoisans should answer the phone when contact tracers call, and no private information will be shared for the person who tested positive. (Courtesy of IDPH)

In the Nov. 6 release from the governor’s office, an outbreak is defined as five or more cases that are linked to a specific setting during a 14-day period. Those cases must be from different households with no known links to other potential sources.

“While certain settings like a college campus, a factory, or group home make it easier to determine an outbreak, most establishments that are frequented by the public, like restaurants or grocery stores, are harder to determine as the setting of an outbreak,” according to the governor’s office.

Exposure data, however, shows where individuals have visited in the 14 days prior to a diagnosis. The locations are places where exposure may have — not definitely have — occurred.

Per the data, “other” was the most frequent category, as it was a term encompassing such exposures as hair salons, funeral homes and warehouses. That category was cited by 11.6 percent of those contacted, or 4,179 people.

Individual cases can show up in multiple categories if a person has visited multiple locations.

“The day before a person tested positive for example, she might go to work, and then stop at a grocery store, and then stop and get drinks with friends at a bar. That’s three exposure locations and that’s just one day,” Pritzker said. “Why is this important? Because exposure data is going to give you a sense of where you’re at the greatest risk for catching COVID-19, and particularly when we see community transmission as high as it is around the state, the risk is going to scale up across the board.”

The state has distributed $237 million to the local health departments to hire contact tracers and get programs up and running.

As for outbreaks, Pritzker said data show “a pattern of formal group gatherings making up the majority of our confirmed outbreaks.”

“Again, these are the settings where it’s easiest to trace the origins of someone’s illness and declare a situation, a formal outbreak,” he said.

Only 10 of 5,478 schools have currently reported COVID-19 outbreaks, he said, noting local health departments will be the best source of information for school data.

Pritzker and IDPH Director Dr. Ngozi Ezike said Illinoisans should answer the phone when contact tracers call, and no private information will be shared for the person who tested positive. Those getting COVID-19 tests should also leave accurate phone numbers.

“So please if you get that call from IL, Illinois COVID Help, please answer the phone and answer the questions,” Ezike said.

The announcement came as the state reported a one-day record for new cases, reaching 10,376. IDPH also reported another 49 COVID-19-related deaths as the total death toll grew to 10,079. That’s among 465,540 confirmed cases since the pandemic began.

The state also announced it would begin including probable cases in its daily case counts. That’s due largely to the fact that rapid antigen tests are viewed as probable exposures, whereas molecular tests are considered confirmed exposures. Most of the 8.2 million test results reported thus far are molecular tests, but the number of antigen tests are growing and the U.S. Centers for Disease Control and Prevention have changed guidance on reporting probable tests, which could also include people with symptoms and a known exposure.

“In August, the national case definition was changed so that an antigen test alone would be considered a probable case with the increased use of antigen tests,” Ezike said. “We will get more probable cases and we want to make sure that we capture all of those cases that are diagnosed via antigen test, similar to how the CDC does this, and similar to how other states are calculating this as well, so that we can show our actual true burden of disease here in Illinois.”

The number of people hospitalized for COVID-19 in Illinois grew to 4,090, setting a second-wave high for the 12th straight day. Intensive care unit beds in-use increased by 14 from the day prior to 786 as of Thursday night, while ventilators in use by COVID-19 patients decreased by four from a day prior to 339.

The statewide seven-day rolling average case positivity rate shot up to 9.7 percent, tying its highest point since May 20.

Pritzker once again said further economic rollbacks could be on the horizon if the spread of COVID doesn’t slow, although he was once again not specific as to what they could entail.

“The only way that science has told us that we can limit the number of cases or the epidemiological spread of the disease is by having less interaction and less interaction means cutting off people’s ability to interact in various places,” the governor said.