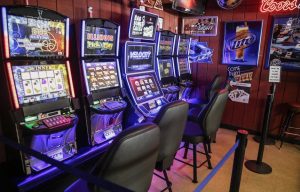 Nowhere in Illinois may the divide between video gaming advocates and opponents be more apparent than in Lake County.

Despite 21 of the county’s 29 communities having banned video gaming terminals, Lake County ranks only behind the significantly larger Cook County in both number of video terminals and net terminal income.

The issue of a moratorium on video gaming in unincorporated areas of the county even equally split the Lake County Board, with nine votes in favor and eight votes opposed. Even though more board members voted in favor of the moratorium than against it, the measure failed because four board members only voted “present.” Because 21 board members were present, the measure would have had to get 12 votes to be enacted.

“The moratorium would not have affected those (businesses that) currently have video gaming or any business that currently has a liquor license. They would have the opportunity to apply if they choose,” Pedersen said in a Facebook post after the close County Board vote this summer. “… I thought this was very fair to the businesses that currently have video gaming. The moratorium would only affect any new business from having it.”

With state lawmakers loosening gaming restrictions, even more gaming terminals will be headed to Lake County and any other municipality that allow the gambling machines.

In six years, the number of Illinois communities banning video gaming has fallen from 63 percent to 36 percent.

“More and more local governments searching for additional revenues are turning to video gaming as a new revenue source,” state lawmakers wrote in their “Wagering in Illinois: 2019 Update” report. “Those communities that offer video gaming are set to receive one-sixth of total tax revenues collected. As the need for additional local revenues elevates, so does the pressure to overturn the ban.”

There are seven local communities that have restrictions on their video gaming. They are: 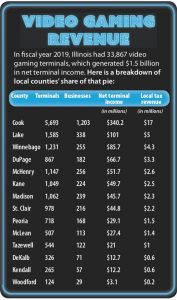 As video gaming numbers continue to increase, the opposite has been the case for Illinois’ casinos. Only one casino — Rivers in Des Plaines — has had an increase in adjusted gross receipts in the six years since video gaming came onto the Illinois scene. Excluding Rivers, the other nine casinos in the state have seen revenue fall a combined 27 percent, with all experiencing double-digit losses.

“While there are an abundance of factors causing the decline in casino numbers, undoubtedly a major contributing factor to this falloff is the increased competition resulting from the growth of video gaming,” state lawmakers said in their report on wagering.

Illinois casinos, prior to this spring’s gambling expansion bill, had been limited to 1,200 gaming positions at their locations. Video gaming added the equivalent of more than 10 1,200-position casinos to the Chicago metropolitan region since the inception of video gaming in the state.

“It appears that video gaming has simply ‘reshuffled the deck chairs’ by redistributing casino gaming revenues to the numerous gaming venues that now exist in this region,” lawmakers said.

And that was the case before Illinois rolled the dice on more gambling avenues this spring.

Is luck running out for Illinois casinos?

Lawmakers said the six new casinos allowed in the state could have an impact on video gaming revenue.

Chicago is still one of the communities saying “no” to video gaming. Proponents are trying to change the mayor’s mind on that.

During a town-hall meeting on possible budget solutions, Rick Heidner told Chicago Mayor Lori Lightfoot that video gaming could bring in $50 million to $70 million annually for Chicago. An industry proponent as the owner of Gold Rush Gaming, Heidner said Chicago is one of only 100 municipalities in the state that still does not allow video gaming and that the gambling machines would allow the city to fill multiple vacant storefronts.

“I’ve definitely heard a lot about the idea,” Lightfoot said.