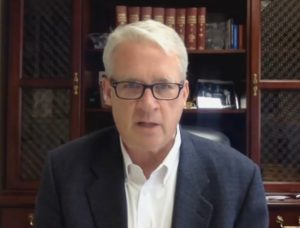 SPRINGFIELD – Illinois House Republicans on Monday, April 13 called on Gov. J.B. Pritzker to do more to handle the unprecedented volume of new claims for unemployment benefits coming into the Illinois Department of Employment Security, even if that means reassigning workers there from other state agencies.

“Every day, my office and my colleagues’ office, Democrat and Republican, are inundated with calls and emails asking for help in filing for unemployment,” House Minority Leader Jim Durkin, of Western Springs, said during a video news conference. “These are people desperately asking for help telling me they can afford to pay their rent, buy their groceries for their family.”

Since the week that ended March 14, IDES has reported receiving more than half a million new claims for unemployment, due mainly to people being laid off from businesses that have been ordered closed during the COVID-19 pandemic. That number far exceeds all previous records for new unemployment claims.

Durkin was joined in the video conference by Reps. Grant Wehrli, of Naperville, and Mike Marron, of Fithian, both of whom said they have had similar experiences with constituents.

“Since the stay-at-home order has been issued, my office has been flooded with calls from constituents that have been laid off and are desperate for help in filing for unemployment insurance,” Marron said. “We get at least 10 people a day who call and ask, ‘How can I get my application processed?’ Many of these individuals were unexpectedly notified that they were out of work due to how fast the situation materialized.”

“Remember that the computer system that was built to handle unemployment claims for our state was built in 2010 in the wake of the Great Recession, and it was built with the idea that unemployment would never really exceed what we saw in 2008 and 2009,” Pritzker said. “But today, we are seeing five times that number of claims.”

Durkin, however, said the administration should have anticipated the flood of new jobless claims that would come in to IDES before Pritzker issued executive orders closing nonessential businesses.

Pritzker said the IDES call center operates with a staff of 173 employees and that it recently updated its phone system to handle more calls. He also said the agency is establishing an outside call center with an additional 200 agents to field calls.

In addition, he said, the state has worked with a number of tech companies to upgrade the unemployment website to launch an automated “web bot” that can provide answers to frequently asked questions during all hours.

Since March 1, Pritzker said, IDES staff have worked a combined 6,500 hours of overtime and have processed more than 273,000 unemployment claims. That, however, is only a little more than half of the 513,000 new claims that have been filed during that time.

Since issuing a disaster declaration last month, Pritzker has dominated the statewide news cycle with his daily briefings and updates on actions his administration has taken to slow the spread of the disease. Illinois Republicans, meanwhile, have been largely silent and supportive of Pritzker’s handling of the pandemic, even as Pritzker has doled out blistering criticism of the Trump administration for its handling of the crisis at the national level.

“Now we hear on a daily basis from Governor Pritzker about his frustration with the federal supply chain, and I share that frustration,” Wehrli said. “But he has absolutely no oversight of the federal government. He has 100 percent oversight of IDES, the Illinois Department of Employment Security, and this needs to get fixed right now.”