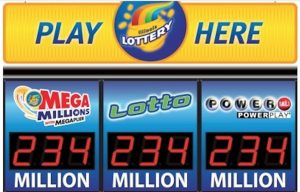 Mega Millions, Lotto and Powerball are among the Illinois Lottery games for which tickets can be purchased online or via the Lottery’s app. (Illinois Family Institute photo)

Fifth in a series looking at gaming expansion in Illinois

You aren’t keeping up with the Jerseyans — at least at the Lottery machines.

Despite having the nation’s sixth largest population, Illinois ranks 11th in total lottery sales and 20th in lottery sales per capita.

The Land of Lincoln trails Ohio, New Jersey, Michigan, Georgia and Massachusetts in total lottery sales despite a population that is bigger than each of those states. Illinois recorded $2.9 billion in lottery sales for fiscal year 2018 — not pocket change, but less than half of what is generated by frontrunners New York, California, Florida and Texas.

Even Massachusetts, with nearly half of the population of Illinois, makes chowder of the Prairie State in lottery sales, topping $5.2 billion.

Illinois’ recently passed law to allow lottery draw-game ticket purchases online and through the Lottery’s app is hoped to cut into those gaps — growing sales by an expected 12 percent this year.

Although trailing other states, Illinois Lottery sales still mean a lot to the state coffers. The Lottery’s profits of $735 million in fiscal year 2018 made up more than half of the $1.4 billion in profits from all gambling statewide.

Rob Karr, president of the Illinois Retail Merchants Association, said the organization didn’t view the online expansion as one that would sap business from storefronts because the online sales are expected to reach different players and do not apply to instant games.

Jason Schaumburg, communications director for the Illinois Lottery, agreed, saying retail sales have not faltered because of online offerings

“We haven’t seen that to be the case. The Lottery’s digital program is meant to complement the retail program,” he said. “Efforts to grow the business online are rooted in the desire to offer players (new and old) an additional way to engage with us, not in converting existing players from retail players to digital players.”

Instant tickets make up 62 percent of total Lottery sales in Illinois with draw games making up the rest. 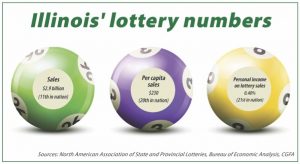 Draw games were up almost 7 percent in fiscal year 2018, with sales from the multi-state Mega Millions game responsible for the lion’s share of the growth.

“This was likely due to the number of extremely large jackpots,” state lawmakers noted in their report “Wagering in Illinois: 2019 Update.”

They noted that the October 2018 jackpot that rolled over to $1.5 billion, the largest jackpot ever, generated massive sales, as did Mega Millions jackpots reaching $500 million on two other occasions during the fiscal year.

While Illinois Lottery proceeds go to the capital improvements and school funds, causes are also benefiting from instant games.

Profits from the “Easy as 1-2-3” game, which went on sale in September, will be deposited into the Homelessness Prevention Revenue Fund and be used by the Illinois Department of Human Services for homelessness prevention and assistance program grants.

The ticket is the newest addition to the Illinois Lottery’s portfolio of instant tickets that support causes, including Illinois veterans’ services, the fight against breast cancer, multiple sclerosis research, Special Olympics training programs, police memorials, and assistance for people living with HIV/AIDS. Since 2006, Illinois Lottery specialty ticket sales have raised nearly $52 million for special causes throughout the state.

“The Illinois Lottery is proud to support such a worthy cause and expand its commitment to good causes around the state,” Illinois Lottery Acting Director Harold Mays said when the “Easy as 1-2-3” game was rolled out in September. “This new game will help us achieve our goal to create fun games that benefit people and communities throughout Illinois.”

While such an instant game can provide needed public dollars to a cause, any instant game can set youth up for gambling issues down the road, according to the International Centre for Youth Gambling Problems, based in Montreal.

Center officials note that it is not usual for parents to purchase lottery tickets for their children.

They said retrospective studies found that adult problem gamblers reported an earlier onset of gambling, often beginning between the ages of 10 and 19, with some studies showing children as young as 9 years old beginning gambling.

“Problematic gambling among adolescents has been linked with increased delinquency and criminal behavior, as well as the disruption of family and peer relationships,” the center says on its website. “Problem gambling can also negatively affect overall school performance and work activities. While youth may present with different initial symptoms than adults, they nevertheless share similar characteristics. For example, adolescent problem gamblers report a preoccupation with gambling, sacrificing school, work, parental and peer relationships in order to continue gambling.”

The state has launched an educational campaign to help lottery players make more informed decisions when playing after an online survey of 1,000 Illinois Lottery players showed that players, particularly young ones, had a poor understanding of gambling.

The study found 63.4 percent of players ages 18-24 had a low level of gambling literacy, such as not understanding gambling is not a good way to make money.

Message included “Set a limit, Stick to it,” “Play for fun. Not funds” and “Remember, it’s a game of chance.”

Jerry Nowicki of Capital News Illinois contributed to this report.

Part two: Is luck running out for Illinois casinos?

The Illinois Lottery urges the winner to sign the back of the ticket and keep it in a safe place until visiting one of the Lottery’s five prize centers — Chicago, Des Plaines, Rockford, Springfield or Fairview Heights. Winners have one year from the original drawing date to claim their prize.

For information or to play online, visit illinoislottery.com.

Founded in 1974, the Illinois Lottery has contributed more than $21 billion (since 1985) to the state’s Common School Fund to assist public schools, as well as hundreds of millions of dollars to the Capital Projects Fund and to causes like Illinois veterans services, the fight against breast cancer, MS research, Special Olympics, police memorials and assistance for people living with HIV/AIDS. In addition to playing in-store, the Illinois Lottery offers online and mobile play for all draw-based Illinois Lottery games at illinoislottery.com. Players must be at least 18 years old.