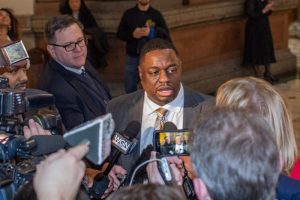 The charges are the result of a long-running investigation into public corruption in the Chicago area that has resulted in indictments against several state legislators. Part of that investigation has focused on officials’ ties to companies that operate “automated traffic enforcement systems,” or red light cameras.

Those are devices that can detect when a motorist runs a red light and issue automatic traffic tickets. The companies provide that service to certain municipalities in exchange for a percentage of the revenue generated.

In 2019, Jones proposed legislation calling on the Illinois Department of Transportation to conduct a statewide study to evaluate those systems. The bill passed out of the Senate Transportation Committee but was never voted on by the full Senate.

The charges, which were made public Tuesday, Sept. 20 allege that in exchange for a payment of $5,000 and a job for an unnamed associate from a company that operates red light cameras outside the city of Chicago, Jones agreed to focus the study only on red light cameras in Chicago.

Jones was also charged with facilitating the scheme by using a Google email account and with lying to federal investigators.

Combined, the three charges carry a maximum penalty of 20 years in prison followed by nine years of supervised probation and fines up to $750,000.

During Friday’s arraignment, which was conducted by teleconference, Jones waived his right to a formal indictment by a grand jury and allowed prosecutors to file the charges through what’s known as an information.

He remains free on an unsecured bond of $10,000, meaning he would only have to pay that amount if he fails to show up at any court proceeding. He was also ordered to surrender his passport and not to leave the United States without permission from the court.

Prosecutors said Friday that there is “voluminous” evidence that Jones’ defense team is entitled to review.

He is also running unopposed for reelection from the 14th District. On Thursday, Gov. JB Pritzker called on him to resign his seat but Jones has not responded to that statement.

His next court appearance will be a status hearing scheduled for Nov. 4, four days before the general election.