(Fifth in a series looking at the pork-barrel extras included in the state gas tax hike of 19 cents per gallon.)

Details of how those funds will be distributed are still being worked out within state agencies overseeing the money, generated from a doubling of the state’s gasoline tax of 19 cents and increased fees for license plates.

The majority of that $5.3 billion is being funneled through the state’s Department of Commerce and Economic Opportunity. The 362-page legislation allocating the Build Illinois money is peppered with grant money to be dished out by DCEO.

Forty-four times in the legislation, money is allocated to DCEO simply “for grants to local governments, school districts and community-based providers for costs associated with infrastructure improvements.”

Those grant allocations total more than $624 million that municipalities, school districts and non-profit entities may be tap into for infrastructure improvements.

That is not counting another $225 million that DCEO will dole out in grants — $175 million for economic development and $50 million for emerging technologies.

Institutions of higher learning will have an additional $210 million available specifically for their infrastructure needs through an allocation to the Illinois Community College Board. 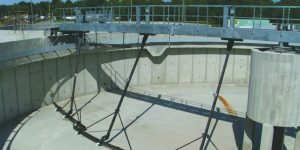 Money to update wastewater treatment facilities is part of the Build Illinois infrastructure bill. More than $5.2 billion has been allocated in the bill for public agencies and community-based providers to apply for grants and loans for infrastructure improvements.

Matt Berry, chief of staff for the College Board, said the distribution of the funds has yet to determined.

“These funds will flow through the Capital Development Board and the projects will be managed by that agency,” Berry said in an email to Chronicle Media. “In years past, funding for deferred maintenance, which is what these dollars are allocated for, has been distributed via a formula that looks at the gross-square-footage of the college.”

The state’s Environmental Protection Agency will have $428 million at its discretion to provide grants and loans to help municipalities with water quality issues and electric vehicle infrastructure.

Kim Biggs, public information officer for the state EPA, said she expects the agency would have an application process for the funding.

“The amount of funds that will be spent would depend on the applications received/projects approved,” Biggs said in an email.

The Build Illinois allocation to the state EPA also includes $70 million to provide grants for electric transportation infrastructure projects “including, but not limited to grants for the purpose of encouraging electric vehicle charging infrastructure, prioritizing investments in medium and heavy-duty charging, and electrifying public transit, fleets and school buses.”

State lawmakers in their board brush strokes also laid the foundation for broadband to make its way into more Illinois communities.

The state’s Department of Commerce and Economic Opportunity will have oversight of $400 million for grants and loans to expand and strengthen existing broadband network infrastructure, health information technology, tele-medicine, distance learning and public safety, including prior incurred costs.

DCEO will also have $75 million at its disposal to provide grants for land acquisition, infrastructure, equipment and other capital expenditures to businesses that encourage new investment and the creation or retention of jobs in economically depressed areas of the state, including prior incurred costs.