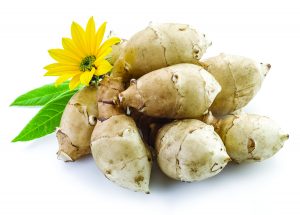 As a healthy addition to our diet, sunchokes are a low-glycemic food and possess a significant amount of protein, with very little starch. (Depositphotos)

If you’re bored with the same vegetable and tuber routine, it’s time to try something new — like Jerusalem artichokes, also known as sunchokes. Think of it as a culinary treasure hunt with a delicious reward for your palate.

Like many tubers, sunchokes look a little strange. But when it comes to food, looks can often be deceiving. The sunchoke is the tasty, knobby, root of a sunflower. Until recent years, this native of North America was more popular in Europe than in the United States.

The sunchoke is a hardy perennial that can grow in a variety of conditions and is not frost tender. With water shortages and the growing cost of agriculture almost everywhere in our country, farmers were looking for ecologically sustainable crops, and the sunchoke fit their needs. Sunchokes are now being grown commercially and by home gardeners in America.

Many small organic farms are also growing sunchokes successfully, so look for them at farm stands and farmers markets. The crop does have its downside. It tends to grow wild, and can be invasive, presenting challengers for farmers and backyard gardeners alike.

As a healthy addition to our diet, sunchokes are a low-glycemic food and possess a significant amount of protein, with very little starch. They also are rich in inulin, a natural fructose type of carbohydrate. Inulin is thought to be better tolerated by those diagnosed with Type 2 diabetes.

When shopping for sunchokes, look for firm, brown-colored tubers. If they are beginning to darken, they are not fresh. After you get them home, store in paper towels in a plastic bag in the refrigerator for up to two weeks. Don’t wash your sunchokes until you are ready to use them, as moisture can lead to spoiling. Sunchokes have a thin skin and don’t need to be peeled.

Sunchokes are extremely versatile. You can use them in the same way you typically use a potato. They have a crunchy texture and are delicious raw. When roasted, their nutty flavor comes out. Steamed sunchokes can stand alone or can be mixed with other vegetables, used in a gratin or to make a delicious soup. If you’re using sunchokes in a creamed soup or puree and want to remove the peel for presentation color, pass them through a food mill or a fine mesh strainer.

Try this recipe for Sunchoke Chips With Parmesan and Parsley as a delicious alternative to potato chips. And remember, this is just the first step on your adventure to discover all things Jerusalem artichoke! Enjoy!

Sunchoke Chips With Parmesan and Parsley

TO BAKE THE CHIPS:

For salt and vinegar chips: Soak sunchokes in vinegar for 2 hours before frying. Drain and pat completely dry. Fry or bake as directed and sprinkle with salt.