The fate of horse-drawn carriages in Chicago will not be decided until at least October.

The antiquated transportation system, touted as a tourist hit and a favorite for marriage proposals and romantics, has come under fire from aldermen for continual violations, including horses being worked well past city regulations and the animals not being given water when drivers are waiting for fares. Animal-rights activists have said the horses are continually mistreated and that the practice should be banned.

Ald. Emma Mitts (37th Ward), chairwoman of the City Council’s License and Consumer Protection Committee, halted a proposal to not renew the city’s three licensed carriage companies. After more than three hours of testimony Sept. 12 by people on both sides of the issue, Mitts opted to hold the legislation in committee, a move that was secured when it gained a second from fellow committee member Ald. Chris Taliaferro (29th). Mitts said she wanted to bring people on both side of the issues, as well as city’s Business Affairs and Consumer Protection and Law departments, to the table for discussion.

Ald. Brendan Reilly (42nd Ward), one of the sponsors of the horse-carriage ban, and Mitts had a heated exchange as the end of the meeting.

Mitts was upset about not being brought in on the issue before it got to the committee level. 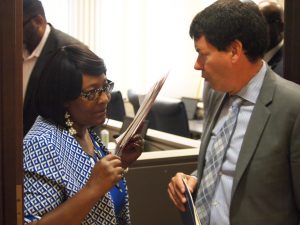 “I hear the concerns,” Mitts said at the end of more than 40 witnesses, including horse-carriage owners and operators. “As chair of the committee, I believe we need to continue the conversation.”

Reilly said the issue primarily affects his ward and the 2nd  Ward and in that vein, the primarily responsibility to address the issue falls on him and Ald. Brian Hopkins (2nd).

Reilly lamented that he has worked diligently to try to find a solution to issues with carriage operators to no avail.

“I have rolled up my sleeves and tried to work out some sense of compromise,” he said of his efforts.

The alderman said carriage owners have shown a “pattern of abusing the law” and that their behavior “would suggest that they don’t plan to abide by any compromise down the road.”

He wanted the proposal to not renew carriage licenses brought up for a vote at the Sept. 12 meeting.

He questioned the practicality of bringing the city’s BACP Department into discussion as members of the city unit do not have the authority to change the wording of ordinances.

“I’ve been working on this for six years,” Reilly said, scoffing at the need for more discussion on the issue. “It is not something that I just started looking into.”

Reilly said that it was not a coincidence that talk of compromise came from the carriage owners only after his legislation to ban the carriage made it to the committee level.

“The horse industry got what they wanted,” Reilly said of the delay. 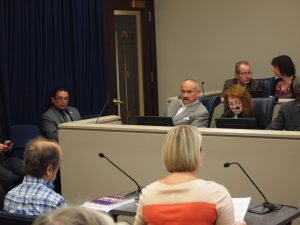 Members of the City Council’s License and Consumer Protection Committee hear testimony from David Tannenbaum, an attorney who cited the more than 300 violations carriage owners were cited with in 2017, and Stacey Ortega, a carriage driver since 1989. (Kevin Beese/Chronicle Media)

The 42nd Ward alderman said he will ask Mitts to put the issue on the License Committee’s October agenda.

From the onset of discussion on the issue, Mitts seemed hesitant to bring the issue to a vote.

After Hopkins talked about safety concerns of the horse carriages being in the downtown area and calling for a vote at the conclusion of testimony, Mitts bristled.

“I have not heard both sides,” Mitts said. “… I am going to allow everyone to speak who wants to be heard. I don’t know if that is all going to get done today.”

At one point during a break in testimony about the treatment of horses, Mitts, whose district includes the Austin and West Garfield Park neighborhoods, said “I am more concerned about the lives lost in my neighborhood every day.”

Donald Geldernick, the oldest carriage driver in Chicago at 73 years of age, said after retiring from IBM, he bought a 28-year-old horse and has been a driver ever since. He said claims that horses are abused are absurd.

Geldernick said claims that the animals have to labor to pull carriage and passengers around the city are wrong.

“They can carry 10 times what the carriage weighs,” he said.

The lack of water for horses is another falsehood, Geldernick said.

“They have plenty of water. If they don’t get water, they die or get colic. We all carry one to three gallons with us,” he said.

Jodie Wiederkehr with the Chicago Alliance for Animals said it is common for the carriage horses to be out for 12 hours, double the amount of time allowed under city regulations.

She said that she and other members of the animal-welfare group have recorded drivers taking horses out for fares when the temperature at Northerly Island is above 90 degrees, another violation of city rules.

“They have horses out when the temperature is over 90 degrees. They have them out for 12 hours. They throw lit cigarettes at the horses’ feet,” Wiederkehr said. “We have it on video that they are not willing to follow the law.”

Watchdogs look out for carriage horses in Chicago

—- Decision on horse-carriages in Chicago drawn out —-