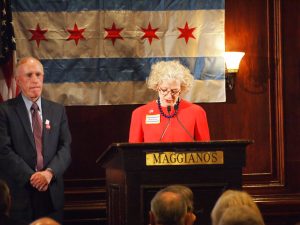 Illinois Supreme Court Justice Anne Burke talks during a presentation last week at the City Club of Chicago about her efforts in founding the Special Olympics. Burke stands in front of a five-star Chicago flag, proposed to include Special Olympics, born in Chicago, as the fifth star. Special Olympics will celebrates its 50th anniversary this summer with events in the Chicago area. Standing on the stage with Burke is James “Skinny” Sheahan, a member of the board of directors for Special Olympics Chicago.

Illinois Supreme Court Justice Anne Burke is one of the few people who can say she was at the first Special Olympics event 50 years ago.

Then a physical education teacher for the Chicago Park District and teaching a sports class at West Pullman Park for mentally challenged individuals, Burke envisioned a city-wide sports meet for children who, at that time, were labeled as “mentally retarded.” She was able to get connected with Eunice Kennedy Shriver, who had an intellectually disabled sister, and the two helped create one of the most successful charities in the world: Special Olympics.

They were able to get the Park District’s Soldier Field as a venue for that first event, and while a success for the athletes, little public support was shown for the initial endeavor.

“There was no one in the stands,” Burke said of the 1968 event. “There was no special education, no Americans with Disabilities Act. The Chicago Park District was the first agency to provide programs for special children.”

However, despite the less than massive initial crowd, Burke, wife of Chicago Ald. Ed Burke, persisted and the event grew into a worldwide recognition of individuals with special needs. Today, individuals of every race, creed and color in 172 countries participate in Special Olympic events from the program started by the Chicago Park District and the idea born in Chicago.

“Special Olympics is an affirmation of life and a beacon of home,” Burke said before members of the City Club of Chicago last week. “It has opened the eyes of the world to see the extraordinary gifts and talents of our special athletes. It has broken down social and physical barriers, and turned days of adversity into years and years of joy.”

That joy will be celebrated this summer as the world converges on the Chicago area to celebrate Special Olympics’ 50th anniversary. Events will include the Special Olympics Unified Cup, where men’s and women’s soccer teams from around the world will play in an inaugural tournament  July 17-20 at Toyota Park in Bridgeview; a Law Enforcement Torch Run, which will feature hundreds of law enforcement officers and Special Olympic athletes from throughout Illinois, the country and the world, on July 20 in Downtown Chicago; the lighting of an Eternal Flame of Hope, created by Chicago sculptor Richard Hunt, on July 20 at Soldier Field; and Global Day of Inclusion, a festival featuring sports activities, interactive games, exhibits, food and entertainment, on July 21 at Soldier Field and Northerly Island.

Burke also remembers standing next to former Chicago Mayor Richard J. Daley and Eunice Kennedy Shriver on July 20, 1968 and Shriver speaking the words that echo through the world for Special Olympians: “Let me win, but if I cannot win, let me be brave in the attempt.”

Volunteers are needed for this summer’s celebration of Special Olympics for everything from welcoming soccer players at Chicago’s O’Hare International Airport on July 16 to providing family and guest services support on July 22. A list of volunteer opportunities can be found at https://soill.volunteerhub.com/.

“We need many volunteers,” said James “Skinny” Sheahan, a member of the board of directors for Special Olympics Chicago. “We would love for people to come out and congratulate our athletes or be there for them as they depart.”

Tom Ricketts, chairman and owner of the Chicago Cubs, said that Special Olympics “is really a source of civic pride for the city of Chicago.”

In making a $50,000 donation to the organization, Ricketts said the Cubs are proud to support Special Olympics program, which serves millions of athletes with special needs.