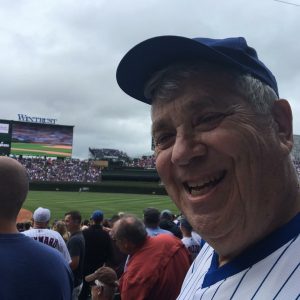 Lenny Rubenstein attended the 1945 World Series between the Chicago Cubs and Detroit Tigers.

It figures if you were young enough, attended the 1945 World Series at Wrigley Field, and lived a nice, clean long life, you’d certainly see yet another Fall Classic at Clark and Addison.

All three native Chicagoans attended one of the four games at Wrigley Field between the Cubs and Detroit Tigers one month after Japan’s formal surrender in World War II. The catch is it’s not automatic they’ll find their way back to the ballpark, which still has the ivy, center-field scoreboard, welcoming marquee and bleachers (albeit greatly expanded), for Games 3-5 against the Cleveland Indians.

Balaban, then 12, attended Game 7, in which the Cubs were hammered in the first inning and their losing fate for the Series was determined. Rubenstein, just 8, showed up for Game 5, also a Cubs loser. And Levy, who would go on to coach the Buffalo Bills to four consecutive Super Bowl appearances, was a 20-year-old Army Air Force enlisted man who witnessed a game from the bleachers.

The catch is Balaban, who has a stake in Cubs season tickets, was not be able to make a sentimental journey to bridge the decades. His turn for two upper-deck seats ($175 each face value) came in the clinching Game 6 of the National League Championship Series against the Los Angeles Dodgers. A total of five men split up the tickets, and the others’ rotation comes up for the Chicago games. There is no appeal despite Balaban’s history.

“I’ll watch with (many of his 14) grandchildren,” said Balaban, a resident of Wilmette since 1960 who marked his 60th anniversary as an architect this year. His offices are near Peterson and Western avenues in West Rogers Park in Chicago.

Rubenstein now lives with relatives in Indianapolis. But he used to reside within walking distance at Wrigley Field at 525 W. Melrose St. He recalled going to Game 5 in ’45 with father Harry.

Levy could not be reached. But in 1994, he recalled his youthful Cubs loyalty growing up in the South Shore neighborhood. Then, six months after his last Super Bowl appearance, Levy was linked up with old Cubs heroes Phil Cavarretta and Andy Pafko live via phone on the “Diamond Gems” radio baseball show.

Balaban was part of the family who owned a famous Chicago movie-theater chain. The Balabans also began WBKB (“Balaban and Katz Broadcasting), Chicago’s first commercial TV station. WBKB aired the first-ever telecast of a Cubs game in April 1946, then regularly televised games through 1951. Jack Brickhouse began his Cubs TV career, at $35 per game, teaming with “Whispering Joe” Wilson on WBKB in 1947.

Some high-level connections snared Balaban his seats for 1945. Chicago Bishop James Sheil invited Balaban’s father, Lou, then in charge of Michael Reese Hospital’s community fund, to take his son to the game.

“So we sat in the bishop’s seats – first row behind the Cubs dugout.

“The exciting part was it was so patriotic — red, white and blue bunting. During the Star Spangled Banner, everyone was standing and singing.  Nobody was moving like today.”

Rubenstein had a similar image of the color and pageantry.

“I remember we had seats in the grandstand behind home plate,” he said, “with the bunting draping the lower brick wall and upper deck, photographers and temporary seats on the field.  Charlie Grimm clowned in the third-base coaching box.”

Balaban and friends used take the Western Avenue streetcar from his 1945-era West Rogers Park home to transfer to the Addison streetcar for their trip to Wrigley Field. He’d often take his glove, as he had for the World Series game. In that era, a fan with a glove paid attention to the batter in case of foul balls.
But the decades brought different in-game customs and technology thought of as only science fiction in ’45. When Balaban and daughter Beth Balaban watched Game 6 of the NLCS, she snared a Kris Bryant foul ball.

Balaban did not at first see the foul. At 82, he was busy texting.

— Trio of Cubs fans reminisce about attending the 1945 Series —