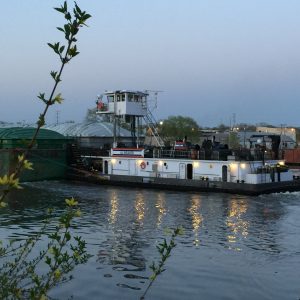 A tugboat pushes a barge in Joliet along the Chicago Sanitary and Shipping Canal. (Photo courtesy of by Jospeh Harvey)

Diesel technology proponents say the Illinois Environmental Protection Agency is on the mark with its plan to use the majority of the Volkswagen settlement money for off-road efforts, like train locomotives and tugboats.

Ezra Finkin, the director of Diesel Technology Forum, said the state would get the most bang for its bucks by targeting major causes of air pollution like buses, locomotives and tugboats.

“The plan that Illinois has put together puts priorities on large engines like switch locomotives, replacing older engines,” Finkin said. “The emissions generated by large engines is significant.”

Environmental groups have expressed concerned that the IEPA plan is not as future-looking as other states, noting that other states have used the maximum allowed amount (15 percent) of settlement funds for charging stations for electric vehicles.

As it stands now, the spending plan for $108 million in VW settlement money that Illinois gets is for 65 percent of that money to go toward off-road efforts, such as new locomotives for Metra trains.

“I think Illinois is doing the right thing,” Finkin said. “It is getting the maximum benefit by upgrading old large engines.”

The state is the recipient of $108 million from Volkswagen and its North American subsidiaries as part of a multi-billion-dollar settlement with the federal government for violating the Clean Air Act. VW admitted to installing “defeat devices” in certain diesel vehicles, causing the vehicles to operate differently during emission testing compared to normal operations, circumventing federal vehicle emission standards.

Finkin said the sole purpose of the settlement money is to reduce NOx emission. He said he understands some environmentalists’ push to get people headed toward electric vehicles, but that could be accomplished in other methods. The VW settlement money should be used for immediate impact items.

“Wanting to scrap gasoline cars? I understand the thinking,” Finkin said. “But for reducing emissions, ask yourself are you going to have more impact with a passenger vehicle or a truck or a locomotive. Locomotives have very, very large engines.

Finkin said tugboats are not the first things that the average Illinois resident thinks of when thinking of air pollution contributors.

“People go to work every day and they see commercial vehicles all the time,” Finkin said. “They do not see off-road contributors like tugboats and switch locomotives, but they are there.”

Finkin said that private owners of tugboats and locomotives run the vehicles all the time.

“They are like airplanes. They only make money when they are used 24/7.”

He said there has been success already in other regions, such as the Puget Sound Clean Air Agency in Washington, that the IEPA can draw on in helping tugboat owners change out vehicles.

“A lot of work boats are very old,” Finkin said. “There are engines in some fleets that go back to the Second World War and they are still in use.”

The IEPA’s environmental mitigation trust would provide up to 40 percent of the cost of a new tugboat, with the other 60 percent having to be generated from other sources.

Finkin said that Illinois is positioned to make the most impact on air quality for residents.

“Illinois has a unique allocation with the most funds being used in the most cost-effective manner,” Finkin said.

IEPA: No need for more input on VW settlement