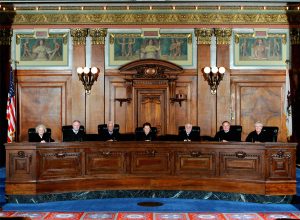 It’s a no-go for the citizen-led initiative to have an independent commission, not politicians, draw the state’s legislative districts, but state lawmakers can still make the change.

In a split vote back in August, the Illinois Supreme Court deemed the Independent Map Amendment unconstitutional. The high court doubled down against the amendment Monday by denying a request for a rehearing.

The coalition behind the initiative said the change is needed because of a lack of competition in elections to the statehouse.

“Legislators are highly, highly unlikely to make the change themselves because it impacts their future, and so the way to do that is to make a change through a citizen-initiated amendment.”

There may be another chance before the 2018 statewide elections to remove politicians from the legislative map-making process, but Bray said citizens will have to look for the fortitude to try again.

“Do they have the time, energy and money that it will require to gamble that the new draft amendment will be approved by the Supreme Court?”

Bray said the coalition learned lessons last time as they did this time, but “it’s very hard to read the future when the Supreme Court doesn’t tell you enough about what they felt was incorrect in the amendment.”