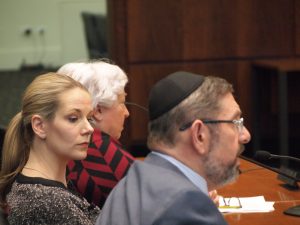 Fred Berkowitz, regional director of Bria Healthcare, which has nine nursing homes in the Chicago area, tells lawmakers during a hearing of the state House’s Human Services Committee that bankers have told him that they are not loaning money to nursing homes waiting on Medicaid payments from managed care organizations because “we’re not confident you are ever going to get paid on those claims.” On the panel with Berkowitz were Meredith Duncan (center), an attorney who represents nursing homes, and Donna Ginther, deputy director of the Healthcare Council of Illinois, an agency representing nursing homes. (Kevin Beese/Chronicle Media)

Representatives of Illinois nursing homes say problems with Medicaid payments from managed care organizations have created a revolving door of care for patients as frustrated suppliers continue to walk away after not being paid.

Meredith Duncan, an attorney who represents nursing homes, said that patients are the ultimate losers in the care carousel. With one-quarter of Illinois residents on Medicaid, the effects of nonpayments and payment delays are far-reaching.

“The first chips to fall are ancillary providers,” Duncan said last week before a hearing of the state House’s Human Service Committee “Nursing homes have to provide all the services. They have to pay for a pharmacy, your physical therapy, your occupational therapy, your oxygen supplier, all these things. Payroll is getting made, but the therapy providers, the oxygen suppliers, those are the ones that are not getting paid.”

“So what is happening is providers are just incurring these debts,” the attorney with the Polsinelli Law Firm added. “(Nursing homes) are getting fired by their provider and then they have to hire a new provider. It is becoming this circus. Where that’s troubling is you have patients, nursing home residents, who need their physical therapy and they’ve been seeing Sarah, their therapist, for a year and now they don’t see Sarah. Now they have to see Caleb and Caleb comes in and does the care until they don’t get paid and Caleb leaves. So the continuity of care is really what’s suffering.”

Fred Berkowitz, regional director of Bria Healthcare, which has nine nursing homes in the Chicago area, said that bankers have told him they are not loaning money to nursing homes waiting on Medicaid payments from managed care organizations because “we’re not confident you are ever going to get paid on those claims.”

He said banking officials already know which MCOs don’t pay, which don’t pay in a timely manner and which hang nursing homes up in the preauthorization process or claims process. He said it has gotten to the point that nursing homes start looking at the money they are shorted in Medicaid payments as bad debt.

He said oftentimes nursing homes have to gamble on a potential patient being discharged from the hospital and if the MCO will pay for the Medicaid patient because the MCO has not authorized his or her admittance into the nursing home. If the long-term facilities guess wrongly, they can wind up having to send a patient home because he or she has no Medicaid coverage. Otherwise, if there are no takers, the hospital has to send the patient home. 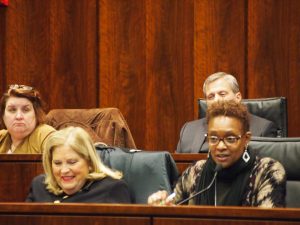 State Rep. Greg Harris (D-Chicago), chair of the House’s Human Services Committee, said that is an issue that needs to be addressed.

“This a real problem for seniors and individuals with disabilities,” Harris said. “If you’re just putting them out of the hospital and say, ‘OK. We are going to drop you at your doorstep or push you in a wheelchair out the front door of this hospital and hopefully someone will come pick you up, a family member’ and then they have to start that process for prior authorization and try to figure out what that person’s needs are, (something needs to be done).”

Donna Ginter, deputy director for the Healthcare Council of Illinois, which represents nursing homes, said back when the state was the primary holder of Medicaid funds she used to be able to shake hardship payments from the state comptroller’s office when long-term care facilities were running low financially and a couple of tied-up MCO payments would be cut loose. Now with managed care organizations holding the purse strings, she said, people are not on traditional Medicaid, which the state controls, except for their initial time in a facility when their acceptance in managed care is pending.

She said she has talked to MCOs when nursing homes have a cash flow problem and “they, in the end, have all refused to do advances, what we call hardship payments.”