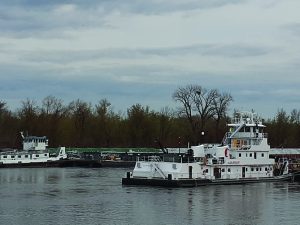 A barge backlog near Memphis caused by a deficient bridge resulted in a bottleneck of 62 vessels with more than 1,000 barges. The suspension of barge traffic caused ripple effects throughout the waterways system, including on the Illinois River. (Photo by Tim Alexander)

This week’s peek between the rows features news about Illinois farmers’ rapid planting pace, commodity transportation delays on the Mississippi River, and a resolution that would compel Illinois to purchase food from more in-state producers. Please read on …

Illinois setting the pace for planting

SPRINGFIELD — Illinois is sixth in the nation and ahead of the national average for corn planted as of May 9, 2021. With 74 percent of the corn crop planted, Prairie State farmers are 13 percent ahead of the state five-year average of 61 percent and trail only North Carolina (90 percent planted), Iowa (86 percent), Minnesota (85 percent), Texas (76 percent) and Tennessee (75) in corn planted, according to USDA’s National Agricultural Statistics Service.

Illinois soybeans are also well ahead of the planting curve. Soybeans planted reached 57 percent on May 9, compared to the state five-year average of just 25 percent. (It should be noted, however, that five-year planting percentages for soybeans, in particular, have been skewed by recent, historic springtime rains and extreme weather.)

Illinois corn planting is ahead of the national average of 67 percent. States with the most planted soybeans are Minnesota (65 percent planted) and Mississippi (64 percent); Illinois is third.

ANKENY, Iowa — The U.S. Coast Guard spent last weekend clearing 62 vessels with a total of 1,058 barges from a backlog on the Mississippi River near Memphis due to a large fissure discovered in bridge support beams carrying traffic overhead on Interstate 40. It was expected to take close to 48 hours to clear the backlog, according to Mike Steenhoek, executive director of the Soy Transportation Coalition.

“This is obviously good news. We look forward to seeing barge traffic on the Mississippi River back to normal conditions in the near future,” Steenhoek said on Friday, May 14. “I routinely express how the United States can increasingly be described as a spending nation, not an investing nation. There is a big difference between the two. As we move forward, it is my hope that this situation will further galvanize efforts to produce a comprehensive infrastructure investment strategy that addresses the needs of both urban and rural America.”

Virtually every barge loaded with soybeans, corn, or other agricultural products on the Upper Mississippi, Ohio, Illinois, or Missouri rivers is destined for Gulf of Mexico export facilities near New Orleans and must pass underneath the I-40 bridge, Steenhoek noted in an email. According to the U.S. Department of Agriculture, in the week ending May 1, 438 barges moved downriver destined for Gulf export facilities. Most of these barges were loaded in areas north of Memphis.

“Because U.S. soybeans are primarily exported between the months of September and February, other commodities, particularly corn, will bear more of the brunt of the barge traffic suspension, but soybeans will clearly be impacted as well,” Steenhoek said. “It is important to regard this bridge closure and resulting suspension of traffic in the broader context of a national and global supply chain that is currently under tremendous stress. The seismic shift in consumer spending over the past 12-15 months from services — restaurants, travel, entertainment, etc. — to goods has imposed historic demand on manufacturing and production and the supply chain that accommodates them. Every link (ports, railroads, trucking, maritime shipping, etc.) in the supply chain is under stress. When a link in the supply chain — barge, in this case — experiences a shutdown or delay, challenges can easily compound — adding insult to injury.”

SPRINGFIELD — The Illinois Stewardship Alliance is endorsing Illinois HJR-33, a resolution establishing the Good Food Purchasing Task Force. The resolution HJR33 would create a task force of state leaders and agency officials to assess state food procurement practices and lay the groundwork for a new procurement policy based on the Good Food Purchasing Policy framework, which encourages state agencies and institutions to purchase food not only on the lowest price bid, but on five key values: local, fair, healthy, humane, and sustainable.

“Illinois spends millions to procure food for public institutions such as veterans homes, hospitals, universities, schools, and prisons every year. Yet the public knows little about how this money is spent and what kinds of business it supports,” said Molly Gleason, ISA communications director, in a call to action issued last week.

“There is no mechanism for tracking how much, if any, is invested in local or sustainable food businesses. Too often, out-of-state corporations win huge food contracts with no accounting of nutrition, quality, fair wages, and humane practices — only the lowest bid.”

If the resolution passes, agencies would report their purchasing practices annually, receive a report card that is available to the public and be provided with support to help make improvements. Eight cities across the country have passed a Good Food Purchasing Policy, including the City of Chicago in 2017 and Cook County in 2018. The measure has the potential to shift more than $300 million in food procurement annually to businesses that meet those five values, according to ISA.

SPRINGFIELD — Pig farmers who wish to develop enhanced biosecurity plans for their operations can consult with University of Illinois Extension veterinarians and the Illinois Pork Producers Association to develop a National Secure Pork Supply Continuity of Business Plan. The plan will help prepare pork premises that have no evidence of infection to limit exposure of their livestock, move animals under a regulatory permit and maintain business continuity during a foreign animal disease outbreak.

Pork producers are encouraged to develop voluntary enhanced biosecurity plans that align with the tenets of the National Secure Pork Supply Plan. To integrate foundational elements of the national plan, the office of the Illinois State Veterinarian and Bureau of Animal Health and Welfare have developed three documents that assist producers in completing site-specific enhanced biosecurity plans.