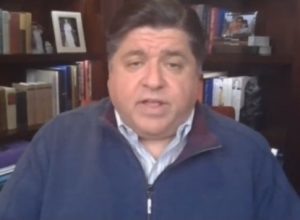 Gov. J. B. Pritzker speaks at his daily COVID-19 briefing Wednesday, Nov. 25 from his home in Chicago. (Blueroomstream.com)

SPRINGFIELD — Gov. J.B. Pritzker announced Wednesday, Nov. 25 the state would give notice to the federal government that it plans to borrow $2 billion from a federal program created in response to the COVID-19 pandemic in an effort to fill the state’s budget deficit.

That figure is less than the $5 billion in short-term borrowing authorized by the Illinois General Assembly in May when it passed legislation allowing the state to tap into the Federal Reserve’s Municipal Liquidity Facility program. The program permits the central bank to buy the debt of state and local governments that are in need of funds.

The MLF program was approved as part of the Coronavirus Aid, Relief and Economic Security, or CARES Act, which is a $2.2 trillion stimulus package passed by Congress in March.

Pritzker said the $2 billion will be used to cover revenue losses and unforeseen COVID-19 expenses for this current fiscal year.

The state previously borrowed $1.2 billion from the Fed’s MLF program to cover losses from the last quarter of the previous fiscal year, and is the only state that has borrowed from the MLF thus far.

The state has paid $200 million toward the first $1.2 billion federal loan, according to Pritzker’s spokesperson. The interest rate incurred on the $1.2 billion loan was 3.82 percent.

Since the announcement Wednesday, Nov. 25 was only for a notice of intent, the interest rate on the $2 billion would not be known until the actual sale is finalized. As of Nov. 23, the website for the Federal Reserve Bank of New York showed a sample rate of roughly 3.37-3.41 percent for municipalities with Illinois’ investment grade, which is one notch above what is referred to as “junk status.”

“Although the General Assembly authorized as much as $5 billion of borrowing from the Federal Reserve, I am very reluctant to saddle our state with that large amount of short term debt. I believe it would be irresponsible to borrow that entire amount, given the persistent fiscal pain it would cause over the next three years, as we would struggle to repay that entire amount,” he said Wednesday. “Our collective intention is to repay this line of credit as early as possible, after either the awarding of stimulus by Congress or a sufficient recovery of state revenues.”

Pritzker said the goal of the short term borrowing is to continue managing the state’s massive bill backlog, which has reached more than $7 billion as of Wednesday, according to the Illinois Comptroller’s Office.

The governor’s comments on the state’s financial situation came during his daily COVID-19 briefing, which he and members of his administration delivered remotely on Wednesday as they have each day this week.

“The safest thing we can do for one another, is stay within our own household. But if you are gathering with others, outside your own home, please do it with just a few people. And importantly, this is not the year to have everybody over at grandma’s house,” he said. “Every day that we take action to stop the spread gets us one day closer to widespread distribution of the vaccines, with fewer lives lost along the way. Just as importantly, every day we throw caution to the wind, even if it’s a holiday, is a day we backtrack on any progress that we’ve made for our health care workers, many of whom don’t get to see their families on holidays.”

On Wednesday, IDPH reported 11,378 new confirmed and probable cases of the disease, and an additional 155 deaths since Tuesday, bringing the statewide total death count to 11,832.

As of late Tuesday night there were 6,133 people in the state hospitalized for COVID-19. Of those hospitalized, 1,208 were in intensive care units, and 679 were on ventilators, which are both second-wave highs.

Instead of shopping at stores on the day after Thanksgiving for Black Friday, Illinois Department of Public Health Director Dr. Ngozi Ezike said residents should shop online.

“While it will look different and perhaps not at all how we want to, try to make this upcoming holiday season one of cheer, and not one of fear for more COVID-19 illnesses and life loss that could have been prevented,” Ezike said.