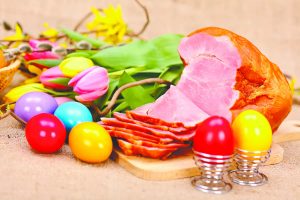 Lamb is a popular dish around the world, especially at Easter. The tradition is rooted in the Jewish holiday of Passover, which celebrates the liberation of the Israelites from Egyptian slavery. With all the history associated with serving lamb at Easter, you may wonder why ham is so popular for Easter celebrations in our country. As with many foods, the reason lamb isn’t as popular in America at Easter is rooted in supply, demand and cost.

Wool was a popular fabric during World War II, but as soon as the demand for wool began to wane, farmers began to raise fewer lambs, curtailing the availability of legs of lamb for sale in the spring for Easter dinners. Ham became a great alternative to lamb because farmers could cure and preserve the meat during the winter and sell it in the spring.

Ham also is a popular meat because it can be prepared in so many ways. This recipe for Glazed Ham with Roasted Vegetables is perfect for Easter, and with a few minor adaptations can be combined with leftover, peeled hard-boiled Easter eggs the next morning to create my Easter Egg Hash. Happy Easter!

1 bunch radishes, tops trimmed and reserved, and cut into halves

1/2 pound of escarole, frisee, chicory or arugula leaves, or the tops of the radish leaves, if available, chopped

To Prepare the Ham and Glaze:

To Prepare the Vegetables:

This Easter Egg Hash recipe is a great use for leftover hard-boiled Easter eggs and the ham and veggies from your Easter dinner.