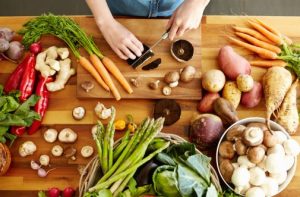 It’s nutrient rich, low in calories and comes in all different shapes and sizes, which is why experts are singing its praises. A good addition to any healthy diet, this food has even been said to have anti-cancer and anti-aging properties. What is it, you ask?

The answer – the mushroom.

Most often considered a vegetable, mushrooms actually belong to the fungi group.

So why the health benefits?

Not only are they a good source of vitamin B-12, but they are a rare source of ergosterol (a precursor to vitamin D2) and include antioxidants like ergothioneine and selenium which both have anti-inflammatory effects.

And did you know? Mushrooms even provide a small source of protein.

“Mushrooms should be part of every daily diet,” says Madhu Jain, a clinical dietitian at Advocate Lutheran General Hospital in Park Ridge, Ill. “I advise my patients to make a conscious effort to include them in any way they can, whether in omelets, soups, salads or even as a side. Plain and simple – they are good for you.”

Some evidence even suggests mushrooms may reduce the risk of breast cancer, says Jain. Other evidence shows they support and enhance healthy immune and inflammatory responses.

“They do this through their interactions with gut microbiota and improved immune cell functionality,” explains Jain.

“If you’re trying to reduce your red meat intake because of its effect on cardiovascular health, mushrooms are a great substitute without giving up the taste,” Jain says. “There is evidence that due to the unique combination of their texture and taste, they can mimic meat and are well liked by those trying to cut it out.”

“When you reduce inflammation in your body, the effects of aging are limited, too,” says Jain. “The only thing I avoid is eating any mushrooms raw, especially Cremica and Portobello due to naturally occurring carcinogen agaritine. Cooking gets rid of this toxin to the most extent.”

Clearly, a winning choice for this dietitian. But if you’re not a mushroom fan, you can still exhibit healthy dieting habits.

Jain’s one healthy diet mantra: “Any time you sit down to eat, ask yourself, ‘Where are my veggies, and where are my fruits?”