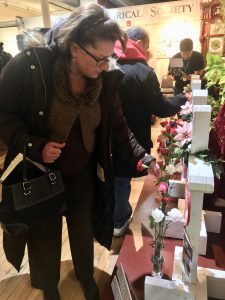 A visitor to the Aurora Historical Museum Henry Pratt Memorial service stops to leave a flower at the cross for one of the five victims killed in the Feb. 15, 2019 factory shooting in Aurora. The museum held a service to commemorate the one-year anniversary of the tragedy. (Photo by Erika Wurst/for Chronicle Media)

It’s hard not to get goosebumps when you see the crosses. Five white symbols of lives lost, adorned with flowers and notes and unconditional love.

It’s hard not to get tears in your eyes when you see photos of grieving families on newspaper covers displayed by the dozen.

But if you look past all of that, you will see an entirely different side of the Aurora Historical Museum’s Henry Pratt Memorial, and you’ll find it hard not to feel pride in the community.

Letters of gratitude written to first responders literally fill the walls around browsing guests — some signed with names still containing backwards letters, others from police departments across the country.

There are even handprint signatures from toddlers too young to write.

Scott Sherwood, an employee at the Aurora Historical Museum, said it took his team more than 100 hours to put together the carefully curated exhibit.

He said the press coverage, the commemorative items and the crosses, as well as the police accolades, provide three different windows into the event.

“All three need to be represented, commemorated, and remembered,” he said. 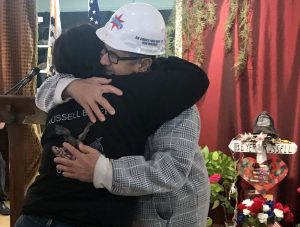 Auroran Greg Zanis, who made the crosses for the Aurora Historical Museum memorial, embraces an attendee wearing a sweatshirt bearing the name of Russell Beyer, one of the five people killed in the 2019 Pratt Factory shooting, during the one-year anniversary service on Feb. 15. (Photo by Erika Wurst/for Chronicle Media)

Which is why so many people found it to be the perfect place to remember Clayton Parks, Trevor Wehner, Russell Beyer, Vincente Juarez, and Josh Pinkard with a moment of silence at the exact time the first 911 call went out 12 months ago.

Students with wide eyes and innocent smiles from Holy Angels School walked around handing out red carnations as tearful family members and coworkers of the victims embraced.

The anniversary hit hard for eighth-grader Kevin Stansilo. He remembers the day well, and the lockdown that ensued as an active shooter situation escalated nearby.

Worse yet, a coach Stansilo had grown close to was injured in the shooting, making the incident even more impactful for the then seventh-grader.

“Once I found out he was injured I was very, very … it’s just hard to explain,” Stansilo said hesitating with his response. “I was emotional about what happened.” 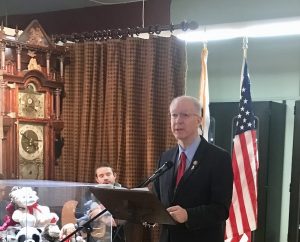 A year later, those feelings are still there. He catches himself being more cautious of his surroundings and of other people.

“I never believed something like this would happen here,” he said. “I think this is probably something that’s going to stick with me and have an impact on me my whole life.”

The love shown by the community, though, and the way the entire city came together, gives Stansilo some reprieve.

It takes a single look at the walls of notes to Aurora first responders to get even a small glimpse into the strength of the community, he said.

Or, you could simply look around the room at the group of people who came out to support one another.

The memorial will remain up through Feb. 29. Hours are Wednesdays through Saturdays noon to 4 p.m.  The Pierce Center is located at 20 E. Downer Place.