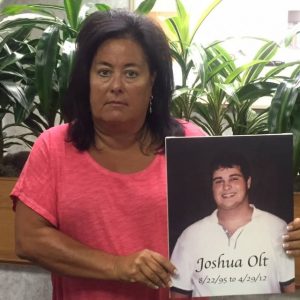 In April 2012, Dr. Tamara Olt of Peoria lost her son Joshua, 16, to an opioid overdose. She has since launched the JOLT Foundation, a non-profit organization aimed at compassionate care for people suffering from opioid addiction, and educating the public on the opioid crisis. (Photo courtesy of Dr. Tamara Olt)

Those are the sorts of comments Dr. Tamara Olt has read from people responding to the opioid crisis and its mounting death toll.

At the end of May, the East Peoria Fire Department hosted an Opioid Town Hall to elevate awareness of the opioid “pandemic”, as Olt described it, and provide compassionate alternatives for understanding it.

“The first year after my son died, I would break down in tears over things like that, because that was my child and he was an amazing human being,” Olt said. “Now I just feel sorry for people who say that, because they have no compassion. No understanding of the human condition.”

Olt’s son, Joshua, died of a heroin overdose in April 2012. He was 16. Subsequently, she established the JOLT Foundation, and is the prescribing physician of Naloxone, a drug that reverses opioid overdoses. It’s offered free, along with overdose prevention training, at her private practice in Peoria.

Joshua became a statistic at a time that is considered, by some, of upsurge for the opioid crisis, one that has become global, qualifying it, Olt said, as a pandemic. Peoria County Coroner Jamie Harwood agreed.

“When I go through my data with the opioid deaths, it’s right there in your backyard,” Harwood said at the town hall. “If you think it doesn’t affect your zip code, you’re wrong.”

Harwood went on to detail the downward spiral of a top-notch student, who, after injuring the same arm twice, became addicted to hydrocodone, a semi-synthetic opiate. When the prescriptions ran out, she turned to the streets and began using heroin, a cheaper alternative to prescription drugs.

She survived two drug overdoses, and was turned away from treatment centers in Peoria twice; once from Proctor Hospital, for lack of insurance, and again at the Human Service Center because they simply didn’t have enough beds at the time.

“Then, my phone rings,” Harwood said. “’Jamie, we have a lady who’s dead here in this bathroom of this local restaurant.’ … We missed the boat. We’ve missed it.  And there’s personal stories like that everywhere I turn.” 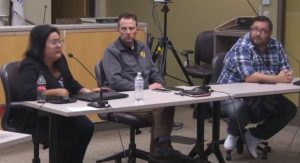 Personal stories that know no zip code, race or age. Anyone, even an elderly resident of a senior care facility, is susceptible to opioid dependency once the drugs, often innocently, are introduced to the body.

Seventy-five percent of opioid addictions, he said, begin with prescription drugs. According to the National Institute on Drug Abuse, opiates are directly related to the opium poppy, whereas opioids are a class synthetic and semi-synthetic drugs with the same characteristics as opiates.

“It’s super easy to become addicted because the brain can’t discriminate between a synthetic opioid or an indigenous endorphin that the brain already produces,” he explained. “Very quickly, the very efficient brain says, ‘What you’re giving me is so much better than what I make … I’m just going to shut down the factory upstairs and lay off all the workers.”

Opioids can create an effect of up to 100 times that of natural endorphins, he said, thus the reason for the swift onset of addiction and its ensuing 90 percent relapse rate.

The addicted brain then ceases to produce natural feelings of happiness and satisfaction, and relies on the drugs, instead.

“They have just experienced something that their brain was never intended to know and it will never forget,” Schaffner said. “The driving force, then, is not to get high, not the euphoria. It’s the feeling of not being sick and wanting to be normal.” 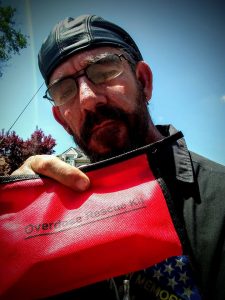 In the wake of the opioid crisis and rising overdose deaths, local agencies are now providing free Narcan kits to all who request them. Narcan quickly and dramatically reverses the effects of opioids and can save the life of a person who has overdosed. “Everyone deserves a second chance,” Kevin Sibley said on his Facebook page.
(Photo courtesy of Kevin “Flat Top” Sibley)

This explains why, without medication assisted treatment, opioid addicts fail at the “cold turkey” approach. Methadone and Suboxone are medications that alleviate withdrawal symptoms.

“A person can’t even engage in treatment without something to regulate the brain again,” he said. “(Methadone and Suboxone) are long-acting and controlled and have less potential for abuse while engaged in psychological services, and they have a better chance of coming out of this.”

The road to recovery isn’t often easy to find, and many never do, according to statistics. Demanding someone with opiate use disorder, a “chronic relapse brain disorder”, to become abstinent isn’t a realistic means to lead them to that path.

“In the real world, that’s not always going to happen,” Olt said. “Harm reduction, a person centered approach. We care about the individual, each drug user, and we consider any positive change to be good.”

That may mean the user agrees to never use alone, or to always have Naloxone with them, or to test their drugs for Fentanyl, a powerful opioid that’s often laced with heroin and other drugs, because it’s cheaper and easier to smuggle.

Naloxone, also called Narcan, and is an intervention drug that reverses opioid overdoses, and free Naloxone kits have become handily available through the JOLT Foundation and local fire departments through a partnership with the Human Service Center.

Each kit comes with three doses of Naloxone, three syringes and directions for use. In June, Schaffner will begin monthly visits  on Saturdays to the Fondulac District Library in East Peoria to distribute kits.

“We’ll set up here at the library once a month, to give out free Naloxone to anybody who needs it. No questions asked. You don’t need to identify as an active user, it could be a loved one, or somebody who is in the medical field, you could just be an average citizen who wants to have some just in case, because just in case happens more often than not.”

Information on the JOLT Foundation, as well as resources on opioid addiction and access to Naloxone kits may be found at JOLTfoundation.org. To contact the Human Service Center for overdose kits and education, email naloxone@hscpeoria.org or call 309-282-1086.

War against opioids far from over in Central Illinois

—- Humanizing the opioid epidemic: Those on frontline speak to addicts’ struggles —-