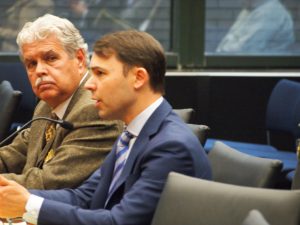 Dr. Tom Britton (right), president and CEO of Gateway Foundation, a nonprofit treatment provider, talks to state lawmakers about his concerns about the potential legalization of marijuana. Gateway serves 1,000 people per day in Illinois. With Britton is Tim McAnarney, a lobbyist for Smart Approaches to Marijuana, a national group that has been fighting the legalization of marijuana throughout the country. (Kevin Beese/Chronicle Media)

Dr. Tom Britton knows all too well how accessibility can lead to addiction.

“The first drug I ever used was stealing a beer out of my dad’s fridge because it was accessible,” said Britton, a person in recovery and the president and CEO of Gateway Foundation, a nonprofit treatment provider. “Had he had marijuana I would have been very excited … Marijuana is accessible now and kids are accessing it.”

Britton is fearful that the proposed legalization of marijuana in Illinois would lead to more problems than it cures.

“I’ve heard tossed around $300 million or $400 million in (state) revenue and the increased tourism and business that would come into (Chicago),” Britton said. “What I would challenge is what are the secondary costs of those things? What we know about tobacco and alcohol, which are the two most used legal drugs which we have a long data set on, is we pay about $10 for every dollar we collect. That is the medical cost, cost in lost productivity, the criminal response to a legal drug like alcohol. We know that the public health impact is dramatic from a medical standpoint.

The chief executive officer of Gateway said that he is concerned about the impact that greater accessibility to marijuana will have on young people, citing that 1-in-6 children who use marijuana become addicted to the drug.

Britton testified at a recent state hearing that he understands lawmakers’ interest in legalizing marijuana from a money standpoint, but warned the initial infusion of money may not prove to be so golden over time.

Gateway serves 1,000 people per day in Illinois and 7,000 people per day nationally. Britton said the agency serves individuals in communities, as well as correctional environments, so it sees the face of addiction on many sides.

“Our data set and experience around what happens when we legalize the recreational use of marijuana is enough that me being a father with two boys, I would not want to risk my children yet in this experiment,” Britton said.

He said every university study done has shown cannabis is a tremendously addictive drug that causes problems.

Britton noted that about 1-in-12 people in this country has a substance abuse disorder, but only about 10 percent of those people get treatment. He said the primary drug of abuse for people with a substance problem is alcohol because of its availability.

“These are the kinds of things we need to think about,” Britton told lawmakers.

The Gateway CEO said if marijuana is legalized in Illinois, he will have more business — business that he is not seeking. He said others, however, are fanning the flames for legalizing marijuana in Illinois for their own personal gain.

“There are hundreds and hundreds of millions of dollars invested right now in the infrastructure to deliver legalized marijuana to the states like Illinois,” Britton said. “This is Joe Camel. It already is too late.”

A nationwide group that has been working on the marijuana issue throughout the country is starting to organize efforts in Illinois, said Tim McAnarney, a lobbyist for Smart Approaches to Marijuana. He is also part of a new spinoff group, A Healthy and Productive Illinois, made up of people and organizations from the mental health industry, law enforcement, business community and youth groups working together to look at the economic impact legalizing pot could have on the state.

“It’s an ongoing group where these associations, these businessmen, these mental health professionals are working up their own data on how they see this is going to impact them, their business and the society that they live in,” McAnarney said.

The Illinois Chamber of Commerce, Illinois Department of Housing Authorities and the Midwest Truckers Association have all expressed interest in the organization, according to the SAM lobbyist.

“A lot of groups are looking to work together now as we develop information to give facts and figures that we think might impact how you vote on the issue,” McAnarney told lawmakers.