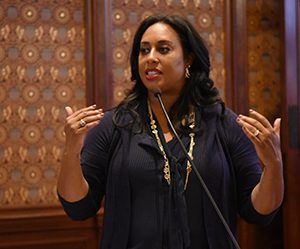 State Sen. Toi Hutchinson (D-Olympia Fields), who chairs the Senate’s Revenue Committee, said the potential legalization of marijuana isn’t just a money issue for the state. “This is not just about revenue,” she said. “This is about if this is a public health issue, whether this is a public safety issue, and whether we can do something different from what is clearly not working today.” (Photo courtesy of Senator Hutchinson)

As the mother of two black sons, Toi Hutchinson worries about a mistake that could change their lives: being caught with marijuana.

While marijuana possession for white kids in areas such as Chicago’s North Shore could result in just a ticket and is seen as a minor blip on the radar that likely doesn’t detract them from college plans, the same amount of marijuana in the possession of a black teen cam have much more serious consequences, Hutchinson, who is also a south suburban state senator, knows.

The Olympia Fields Democrat chairs the state Senate’s Revenue Committee, but said the potential legalization of marijuana is so much more than a potential revenue generator for Illinois.

“I am not looking at this as just a revenue thing because Illinois is in a world of hurt and I chair the Revenue Committee,” Hutchinson said. “Everyone knows I’ll talk about taxes from here to tomorrow. I’m looking at this as to the ability of my children being able one day to give me grandchildren ’cause if they were to make a mistake from what I’m hearing (from legalization opponents) is they should be locked up for it … that their entire futures need to be at risk because they decided to imbibe in something that millions of people have (imbibed).”

She said it is difficult for people who aren’t black to understand just what black parents face in raising their children. The difference in how marijuana possession is treated in white and black communities is part of that equation, she said.

“If you don’t have to raise a son in that (black) environment, if you don’t know what it is like to send your son out into the world and know that no one is going to ask him (if he is stopped) if his mother is a senator,” Hutchinson said, “that a mistake like that could ruin the rest of his life.”

She said such mistakes have destroyed communities of color across the state.

“This is not just about revenue,” the state senator said. “This is about if this is a public health issue, whether this is a public safety issue, and whether we can do something different from what is clearly not working today.”

Hutchinson noted that 46 states have some form of legalized marijuana already and that trend is not going to change.

“This is not a vacuum. This is not coming out of nowhere,” Hutchinson said. “This is not something we cannot see … This is coming.”

Dr. Tom Britton, president and CEO of Gateway Foundation, a nonprofit treatment center, cautioned that marijuana is not what is leading to deaths and individuals being put in prison.

“Only 0.3 percent of the people incarcerated in this country are (there) related to marijuana, 0.3 percent,” Britton said. “So there’s 2.2 million people in prison or jail, only 70,000 are for possession related to cannabis. If you dig into those, they’re almost all charges that have been pleaded down from bigger charges. They’re not actually because of marijuana.”

Britton said he does not want lawmakers to have the illusion that there is the massive problem of arrests and incarcerations for marijuana possession.

“It’s just not true,” said Britton, who is opposed to legalizing marijuana for recreational use.

The Gateway chief executive officer did say that incarceration rates related to marijuana are far disproportionate to the racial breakdown of marijuana use.

He said the number of people of color incarcerated for substance-related crimes is dramatically higher that the number of whites jailed for the same crimes.

“And we know that drug use is pretty consistent across cultures,” Britton said. “It is not like the African-American community has a higher rate of use. They actually have a lower rate of use than the white community.”

Britton said we have a policing and judicial system that needs reform.

“There’s no question about that, but legalizing marijuana is not the solution,” Britton said.

— The role race plays in debate over pot legalization —