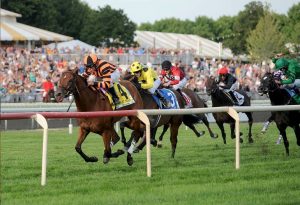 Arlington International Racecourse was a longtime advocate for casino gaming at the race track. The announcement that Arlington’s new owner, Churchill Downs, is not interested in offering casino games at the track has riled some in the horse racing industry. (America’s Best Racing photo)

(Seventh in a series looking at Illinois’ gambling expansion)

The oldest form of legalized gaming in Illinois is a shell of its former self.

Horse racing used to have the monopoly on gambling in Illinois. Then came lottery games, casinos and video gaming, and the sport of kings became a far less attractive option for many gamblers.

“The horse racing industry in Illinois continues to struggle,” state lawmakers wrote in their “Wagering in Illinois: 2019 Update” report. “… The overarching feeling was, without significant changes to the industry, a dramatic turnaround was not likely.”

“The hoped-for outcome is this: the addition of racinos (race tracks and casinos) allows race tracks the financial ability to offer higher purses, which leads to increased interest, both from horsemen and the fans of horse racing,” lawmakers said in their report. “Therefore, proponents have argued that having racinos would not only increase tax revenue for the state, but it would also increase the amount of money wagered on horse racing.”

However, even the long-sought ability to have casinos at race tracks did not go off without a hitch. Despite race tracks getting that ability in this spring’s gaming expansion bill, Churchill Downs, the owner of Arlington said it would take a pass on turning Arlington into a racino.

Churchill Downs is also the majority owner of Rivers Casino in Des Plaines and apparently doesn’t think two casinos in close proximity to one another is good for its casino business.

That has driven a wedge between the race track and the Illinois Thoroughbred Horsemen’s Association, which lobbies on behalf of the state’s thoroughbred tracks.

Mike Campbell, president of the Horsemen’s Association, wrote a letter to Illinois Gaming Board, saying that because of Arlington’s decision, it should be bypassed when sports wagering licenses are being handed out.

“Our association submits that Churchill Downs Inc. has failed the most basic test of honesty and integrity, that it should consequently be denied a sports betting license linked to its Illinois property, Arlington Park, and that, absent its divestiture of Arlington to a qualified entity that will operate the facility as a racino, should be denied any sports betting license(s) linked to any other gaming property in Illinois,” Campbell wrote.

He noted that for more than a decade, Arlington’s former representatives lobbied Illinois governors and legislators for authority to offer casino-style games as a means to boost revenue at the tracks and create more jobs by generating funds to significantly improve the quality of horsemen’s purses. Campbell said that Arlington intensified that pursuit in recent years by insisting that the track be granted the ability to offer table games — in addition to slot machines — to ensure that its racino would be financially viable.

Campbell said Churchill Downs showed contempt for the good faith efforts of lawmakers to supply Arlington with the tools it had so ardently demanded.

“They violated the public trust as expressed by the terms of Public Act 101-31, the state’s new gaming expansion law,” Campbell said.

The Thoroughbred Association’s president said that a racetrack contributes a portion of its revenue to a horsemen’s purse account so that racing professionals — from trainers and backstretch workers to blacksmiths and veterinarians — have an opportunity to earn a living.

“A race track owner’s participation in the gaming industry is a privilege conferred by the state of Illinois,” Campbell said.

He added that when the gaming bill expansion was moving forward this spring and Arlington was averse to the legislation’s advancement, state Rep. Bob Rita (D-Blue Island), the state House point person on the measure directed racing stakeholders to proceed with negotiations over the final language of the bill.

Part two: Is luck running out for Illinois casinos?

Part six: Instant games scratch out quite a niche